I had a dream I was communicating with someone on Skype. I had a shit job in the Navy archiving inventory from draw downs in Cappadonia, and I was dealing with stuff coming from 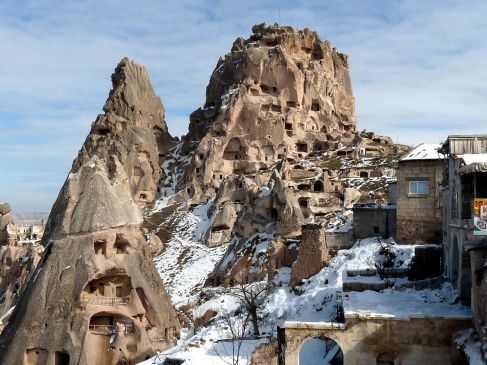 Castillo de Uçhisar, an old network of rooms and tunnels known in Cappadocia as Kale, believed to have been carved into the mountain at Uchisar by the Romans two thousand years ago, but legend held that it was over a million years old. It was hot and dangerous and crumbling and it was full of crates of ammo, generators, petrol tanks and other mundane stocks, stuff that could get blown up or stolen and then blown up.  A couple of yobs, two fresh privates driving the stuff down from the lower mounds of the weird troglodyte structure were gone half of a day, with, like, no radio contact, gone from GPS, nothing, no data signature on any equipment to even suggest what had happened to them. Deep in the carved hill, people figured the soot from old torches had something in them that  had naturally blocked signals by coating the interior with something weird. They’d come back up six hours after going down to a level fifteen stories underground to retrieve Geiger counters and lights, lots of floodlights. There was an old road underneath the mountain. they’d lit up a good hundred yards of the tunnel, but it terminated in a pile of massive rocks and collapsed rubble. No one knew how long the old road had been. Locals were fearful and superstitious, and were told as far back as they could remember that the road stretched for thousands of miles underground, always going deeper. “To fuckin’ China”, Stoltenburg had laughed when he first heard the story. “Yeah right.”  An old King once traveled it so long that when he returned,  dead fifteen years his entourage had carried his mummified corpse, and his son had grown up and people mistook him for his father. The journey had turned the dead king’s skin and that of his son a pale milky white, and he was unable to eat solid food. He spoke a tongue he learned from creatures whom he said lived in caves deep within the earth and they had guided them to see their city, deep into the burning depths of the earth. And this returned king was a bloodthirsty warlord who waged terrible war upon his enemies and who he sucked the fluids from the corpses of slain enemies “like a spider”. One night villagers killed the Spider Lord, his courtiers, and destroyed the road by bringing the mountain down upon it by first flooding it, then pouring rivers of fat and anthracite into its cavities and  recesses and heating the rock until it was translucent like glass. then they placed explosives in it and created a cave-in. That was in 1889. In the glow of the decade-long burning embers,  could be seen by the fearful peonage of Uchisar large slug-like creatures wriggling through narrow chambers, like giant larvae with human faces, and they sang out in fearful gasps and shrieks when the villagers were finally able to bring down the mountain upon the road and crush its tunnel leading into the being’s netherworld. stoltenburg was determined to find out what the fuck people were smoking there and tangle with it.

Privates Stoltenburg and Burgess had mentioned looking for a radio, saying they’d heard music playing, had gone deep below catacombs 8 and 9, and got disoriented when one of the two generators sputtered out because its diesel tank was empty. In the silence, they heard the sounds. For some reason, though, their phones were gone, so they had no proof of the recordings Burgess said he made of the songs, which sounded like cats mewling.

Anyways, I had a dream I was talking to Burgess on Skype from my office, coordinating their next objective, when I started to lose image, so I tapped the acoustic imaging sequencer on their Tunnelcraft, intending to maintain visual and pick up enhanced information about the actual dimensions of the catacombs, which didn’t come up at all on the little tablet cams, which didn’t have lights. so, I switched on a second monitor in my office and brought up the sonar imager, which was located about ten feet away from the two men. But, when I brought them up on video, what I saw was so totally disorienting that I wanted to say I had to go shit and cut transmission. But I was frozen.Someone in a robe was holding a tablet and filming Burgess’s face, Burgess was talking to me while he lay facedown on Stoltenburg, who was obviously dead and going through some sort of metamorphosis. I could make out his features, but waves of shapes were deforming his limbs and face as though ripples of water were flowing through his flesh, and there were appendages growing out of his back and worming their way into Burgess, whose legs were totally gone, just a black gooey mass of pulsing baubles and sputtering bubbles. Another figure in a robe had a very large bore syringe in his hand and, with extreme difficulty, was injecting something directly into his back. The syringe was the size of a carton of eggs. When he paused for a moment, the writhing I saw in Stoltenburg flared in Burgess’s face, and modulated his voice, making a polyvocalizing shift in tone. Burgess said something about needing to power up the generator – I wasn’t even listening – my skin was crawling – and the figure killed the tablet. He turned it quickly back on. The other robed figure was still injecting the substance into his back, while the first held the tablet in front of Burgess;s head. What looked like a writhing sponge-like multitude of mouths were opening all over his back for a few moments, like he was saying something. Then the robed figure holding the tablet turned off the device and walked away, away from the Tunnelcraft. The other figure staggered to his feet, clearly exhausted from whatever he was squirting into the two mens fused bodies. In the silent, strange contour images floating on the screen, I saw a rippling convulsion finally engulf the two men’s bodies, and it formed into a fat, grub-like thing, about nine feet long with millipede pairs of legs, but it still retained Burgess’s head and eyes, which were massive now. Burgess looked at the remaining robed figure, who pointed at a ditch in the tunnel. The Burgess creature skittered over to the ditch and buried itself with seemingly effortless ease into the earth, burrowing down, and disappeared. The other robed figure walked in the direction of the other. I sat there for a full hour watching for any other movement. Then, for a flickering 20 seconds, Burgess’s eyes and forehead appeared on the screen briefly, and i could hear him say he had the generator finally back up, and they were heading to Goreme for more diesel. But his lips weren’t moving. Then it went out again. The thing had spoken my name.

Then I woke up and was freaked out.