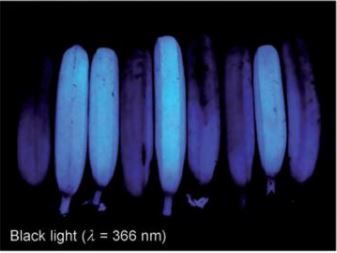 I bought some glow powder for an art project, and then I somehow misplaced it four years ago. I recently found the jar again, with a piece of paper tied to it with a rubber band, the Safety Data Sheet (SDS). It looked sort of toxic. The material was mildly irritating to lungs, eyes and skin, so I realized I should just get rid of it.

I called local fire and police, then visited local fire and police to dispose of the 2 oz bottle of luminol, which is used in forensics to detect blood splatter. Weird. It also reacts to cleaners and poop, so it is not a good test. It emits a blue glow when wetted, and it lasts for about 30 seconds. It can be used to trace copper, cyanide and other stuff in your body. You can see a faint blue glow under time lapse exposure upon a surface that has luminol and a bit of moisture. It is toxic, and if a kid got it in his eyes, breathed it, or got it on his skin, one would need to wash it off, but would be unable to put it in the water supply or storm water system...

So I wanted to get rid of it. I called a local fire department and police station, but no one answered. I checked the Department of Environmental Protection. I went to the fire department. I went to the police department. I waited for DEP ( the person who answered laughed at me and said the DEP does not handle stuff like that). I waited and waited for 911 to return my call. I waited because no one was involved in safely disposing toxic hobby slime powder.

I had a conversation with firemen, but no one had an answer. The luminol was like one of those tragic airport refugees doomed to an interzone existence because diplomacy shifts between flights.

I finally took it to an ambulance dispatch location where I found someone with the common sense to read the Safety Data Sheet attached to the unopened bottle.

I worked in environmental services in nursing homes for eight years, and we had biohazard and sharps containers for hazardous waste. I trained service staff and monitored the process. I trained people how to work in a room with someone projectile vomiting blood, for example, or how to clean up bunch of glass in a room occupied by someone in elevated isolation. My training stopped at airborne stuff. I worked for management companies that did not absorb that liability. I do not know how to deal with COVID-19 from experience. I go with whatever advice I get from the government. It is expensive as shit to handle hazardous materials.

I got my DEP call back a bit later. The representative tried to call a Pennsylvania Trash Disposal (PTD) service. Supervisor on vacation. Message left. I told the DEP rep I already handed it over to an EMT.

I am glad I did not mix it with my paint. Pro-Oxidative Interactions of Cobalt with Human Neutrophils

The cool thing about luminol is that it yields some data that helps with quantum level measurement systems, and laser based spectral analysis. The uncool thing is goofing around with stuff you do not understand. I found it odd that there was no standard operating procedure for waste containment by any local or regional offices. I can only assume this could be improved.

Meanwhile, I draw pictures on bananas. Because they are radioactive and give off a blue glow, like me. I see bananas.

Luminol should not be used as a single-point determinant for the presence of blood splatter, as it has been shown to glows with surfactants, poop, and other stuff. BTW Astrobotic turned down my suggestion to use this system for quantum spectral analysis on the moon in a crater using a piece of Mylar with a big banana lithographed onto it. Of course, if you want to get technical, you can reduce the cost using machine learning to pinpoint colors down to the quantum level.

I see bananas in all sorts of complex science that I enjoy learning. It looks like a smile, but I usually think of a banana when I see an arc length.

Banana orbit
(Science: radiobiology) in a toroidal magnetic geometry, the fast spiraling of a charged particle around a magnetic field line is accompanied by a slow movement (drift) of the centre of the sprial. Particles with relatively low parallel energy are mirrored on the inside of the torus because the toroidal magnetic field has a 1/R dependence and is highest on the inside.
The combination of mirroring and drift produces a special class of particle orbits. Projected onto a poloidal plane, the drift orbit has the shape of a banana. These orbits are responsible for neo-classical diffusion and bootstrap current.