I mentioned in a previous post how I did a split cutting the grass June 13th. I was mowing a hill, a rather steep incline, and i slipped and did a graceless, old man split and let the mower crash to a retaining wall below. I pulled something in my groin, I don’t know exactly what. It seemed fairly healed until today. I went out to do a slog on a cross-country course for a few hours today. I was trying to put myself totally out of commission, the big month-end blow-out. My horrible plan involved running a marathon, then going on a pub crawl to three different bars during the five mile run back home. I hoped to arrive at the house with a 50K under my belt, and a bellyful of ale. Unfortunately, the injury flared up pretty bad. Such a pretty day, though, starting out. 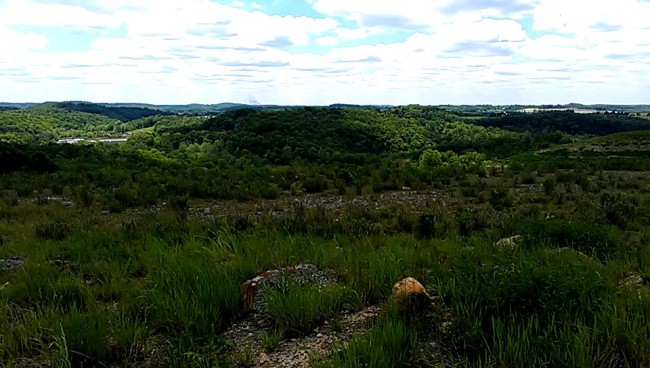 I spent yesterday at an outdoor amusement park. I was dehydrated when I went for a run today. I ran out the front door, then ran 3.7 miles or so to the cross country course. I had lots of gels and salt on me, even a small bag with Heed. I was ready. After five miles I hit a port-a-john and pissed brown. That’s a bad color. I tried drinking a half gallon of water and took a salt tablet. I poured sweat, but the injury in me groin, arggghh,  got worse and worse. I had zero energy and I kept thinking about beer. I could feel the wheels falling off. The hitch in my stride got worse and worse.

I have an endurance run in two weeks, a twelve-hour challenge. Going for fifty miles. I decided to hang it up after doing two x 2.2 mile laps and two x 0.93 mile laps. That’s a 10K on grass. Real nice day, shame I had to head back. I had to skip a route through the neighboring town, a college town with lots o’ bars. I started running back. My left hip was a hornet’s nest. I mean, it hurt like hell. I stopped and stretched, ran a bit, hobbled, walked, stretched other things. Toast.

I thought, crap, I’m not even going to get ten miles in. I turned around and walked backwards, watching the storm clouds receding. I’d been running in a fine drizzle for a couple of hours. A cool breeze was picking up. I felt robbed by my own body. That’s what it is to get old. Still walking backwards, I started jogging. To my surprise, no pain whatsoever…

I’m running backwards, checking the shoulder of the road for big rocks, sticks, broken bottles, the usual. It feels great. I’m using muscles I normally don’t. My new goal is two miles from the cross-country park, a horrible dive bar in Brownsville about 0.8 miles from my house. I’m going to get lit! I make my way down the slope to the river, still going backwards. Altogether, I ran about 1.5 miles backwards. When I reach the arched bridge, I run facing forward. It’s torture, but I’m only only one run round the track away from a tall cold one. I’m aware of my horrible sweat. I’ll sit on the patio, kill two beers, and be on my way, I think. I reach the bar- closed. Closed. Closed. Closed.

I can’t run anymore. My hip is murder. I turn around and run backwards until I hit a steep incline. For some reason, running up steep hills is totally painless. I reach my neighborhood and do a death shuffle four blocks to my house. 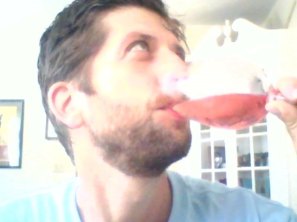 And it felt so right. 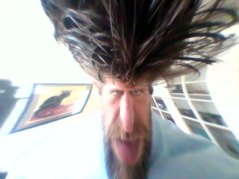 Look at that focus, that sense of purpose! It’s supposed to be for cooking? Ha!