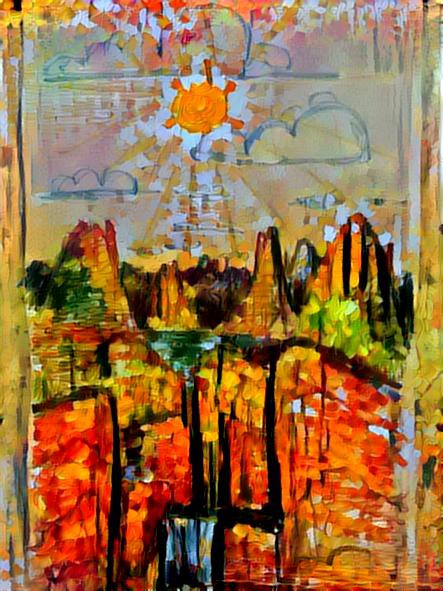 I call this Kidaclism Canyon because it is a riot of color and Byzantine, angular and flattened perspectives. The water coursing through a series of cataracts were supposed to be finished with correction tape, but one of the kids broke the spool, so I ran it through a digital filter from Dreamscope and it turned out nice.

We are trapped indoors during a very cold windy day. Every thirty seconds, I am summoned to fix a railroad track junction, to hear about controversial book reports, fill or find cups, clean spills, toss a boy in the air and catch him and/or put on a mask and make fart sounds. These are standard, traditional dad moves.

The landscape characterizes the open, empty spaces of the mythical American  west. Hot, desolate, chiseled buttes and canyons cut from millions of years of rainfall that have slowly  eroded an even more ancient sea floor thrust up by epic forces within the Earth.

It’s only spastic if it’s speed up by a factor of about a quadrillion. So, a two-second reverie spent considering the life of the Colorado river, for example, and its massive displacement of rock, represents about 0.39 quadrillionth seconds of the time it actually took. Good to know.  By the way, I have been interrupted twenty times by my kids to resolve some problem or another this far. Now twenty-one. To look at a skee ball token. Six millions years of flowing sweet water vs. a moment of  skee ball token scrutiny. Twenty-two times. Drip…drip. It’s unimaginable to think that people find life tedious when so very little time we have. Twenty-three, to count five oranges together. It’s cataclysmic, and the voices of kids echo through time this afternoon like a river through an ancient canyon. Spastic and natural.

Sometimes I like to draw stuff for my young  kids to inspire them to draw. I use their markers on a roll of banner paper. When they draw, I get a half hour of relative quiet in the house. One draws landscapes and buildings, the other draws all sorts of stuff.  Jets fly silently overhead like needles carrying thread.